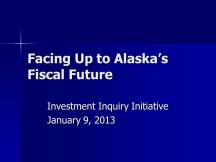 I had the opportunity yesterday to present before the second day of Lead: North’s “Investment Inquiry.”  For those that aren’t familiar, Lead:  North is a project of the Institute of the North, which is designed to “act as a platform from which young Alaskans, ages 21-40, are educated about – and engaged in – their responsibilities to one another, their community, and state.”

The three-day “Investment Inquiry” is being held to “investigate how Alaska ranks compared to other oil jurisdictions, and why.”  Using the Fraser Institute‘s  Annual Global Petroleum Survey as a baseline, the inquiry is designed “to explore where Alaska fits into global industry decision-making based on 18 key questions framed around taxes, regulatory environments and labor conditions.”

The presentation focused on the influence that state fiscal policy (beyond taxes) has on investment decisions.  Investors understandably tend to limit investments in resource dependent jurisdictions which project substantial future fiscal deficits due to concerns that, once the deficits mature, policies will be changed to seek substantial increases in government take.  From this perspective, Alaska’s looming fiscal crisis, discussed more fully in a recent report by the University of Alaska’s Institute of Social and Economic Research’s (ISER) (“Maximum Sustainable Yield:  FY 2014 Update“) presents a significant impediment to attracting long term resource investment to Alaska.

The presentation uses the Office of Management and Budget’s recent FY 2014 Ten Year Plan to outline the next ten years, and then shifts to ISER’s recent study to discuss the time horizon beyond.

As I have explained elsewhere on these pages, based on current policies the future is not bright either for Alaskans — or investors.  In ISER’s words, “[r]easonable assumptions about potential new revenue sources suggest we [the state] do not have enough cash in reserves to avoid a severe fiscal crunch soon after 2023, and with that fiscal crisis will come an economic crash.”

No resource investor wants to be around for that situation — the temptation to increase government take is simply too great.

The slide deck I used for the presentation is available here.

This entry was posted in Speeches & Testimony. Bookmark the permalink.