A Serious Wake-Up Call from ISER: “In fiscal year 2014, Alaska’s state government can afford to spend about $5.5 billion.” 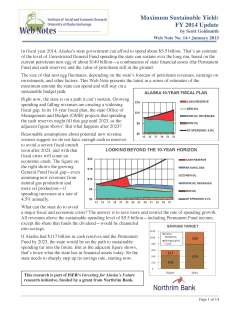 The comparable number in the Governor’s proposed budget is $6.5 billion, and the Governor has said that he would accept the Legislature raising that number even higher (to $7 billion). END_OF_DOCUMENT_TOKEN_TO_BE_REPLACED 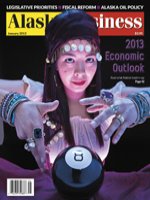 As noted on these pages previously, I write a bi-monthly column on oil & gas issues for the Alaska Business Monthly.  This is the fourth column, originally published in the January 2013 print edition and available online here.

The last column in this series (“Out of Alignment,” Alaska Business Monthly, November 2012) focused on the reasons why Alaska oil policy is misaligned with the objective of maximizing the development of the state’s oil and gas resources.

The column discussed the state’s attempted use of two tools—tax credits and direct regulatory intervention—to steer investment to Alaska and why those tools have failed to produce significant results in terms of increased production. As I explained, the state’s use of the tools has been similar to backseat driving—and just about as successful.

The column also briefly mentioned a potential solution to the state’s alignment problem—developing a means for the state to co-invest alongside industry in the development of the state’s oil and gas resources. This month’s column further explains that concept. END_OF_DOCUMENT_TOKEN_TO_BE_REPLACED