Alaska Fiscal Policy| Another reason to be concerned about state spending, NOW … 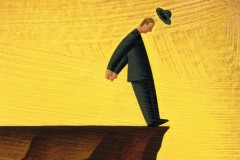 In a longer post earlier this week I expressed serious concerns about the level of spending proposed by the Governor in his recently announced FY 2014 budget.  See “Five takeaways from the Governor’s proposed budget …” (Dec. 18, 2012).

As I have continued to work through the budget, additional reasons are becoming apparent which underscore why it is critical that state spending be reduced now.  One in particular caught my attention yesterday.

The 10-year plan that accompanies the Governor’s budget analyzes four scenarios to plot Alaska’s potential future.  They are (using the titles contained in the plan):

The best outcome of the four is the first, where General Fund spending is capped at $6.5 billion through the entire 10-year period (and oil remains between $110 and $125/bbl throughout the entire period).   In some contexts, the Governor and others have referred to that as maintaining the “status quo,” but it is anything but.  Because the Statutory Budget Reserve is being drawn down the last four years of the plan, the state’s underlying fiscal situation is deteriorating.

Moreover, by failing continually to increase savings over the period despite the continued receipt of relatively high revenues, the state’s long term financial position is being seriously undermined.

One example explains the extent of the problem.  While the Office of Management & Budget (OMB) has not yet released the detail behind its most recent 10-year plan, the detail behind last year’s 10-year plan reveals one account that is significantly — and irrevocably — rising throughout the period.

Most Alaskans are generally aware that the state’s two largest retirement accounts — the Public Employee Retirement Account (PERS) and the Teacher Retirement System (TRS) — are significantly underfunded and the state is making catch up payments to restore the balances.  Few Alaskans, however, are aware of just how much that effort will cost.

Thus, over the ten year period that the Governor proposes to maintain the “status quo,” annual spending to cover the current underfunded amounts in PERS and TRS alone will increase by nearly $300 million.

That is just the tip of the iceberg, however.  According to a 2011 presentation to Senate Finance by the Departments of Administration and Revenue, the required level of annual “state assistance” to cover the unfunded amount does not stop in FY 2022.  Instead, as shown on the graph to the left, the required payments are anticipated to continue to grow at the same rapid rate after FY 2022, ultimately reaching over $1.3 billion per year by 2029.

If future Alaskans are to have sufficient revenues to meet these and other similar obligations, substantial  savings need to be set aside now, while the state continues to receive significant revenues from oil.    If savings are not set aside now, future Alaskans almost certainly will suffer a lower standard of living as they are required to implement income, property and sales taxes to cover this and other leftover obligations of previous generations, as well as the ongoing costs of government that then exist.

As a result, a strategy of maintaining the “status quo” as the best case doesn’t cut it.  Instead, significant cuts need to be made in current spending now, in order to create a “nest egg” sufficient to enable future generations to deal with the anticipated growth in just this one account.

Alaska — and Alaskans, both in the Legislature and without — desperately need a change of mindset, beginning now.  Rather than asking for continued handouts from state government, Alaskans — particularly older and middle age Alaskans who plan to retire here, and younger Alaskans who plan to stay and raise their families here — need to start rewarding — and demanding now from those who waiver — not continued spending, but significant levels of savings.

From the perspective of this writer, Legislators — and Governors — who do not respond should be retired, soon.  Alaska — and Alaskans — cannot afford them.

One response to “Alaska Fiscal Policy| Another reason to be concerned about state spending, NOW …”