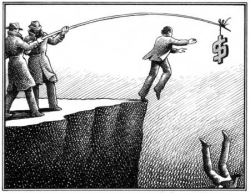 The short answer is pretty damned deep, a lot more than they are proposing to cut government spending.

One of the things I spent time on while preparing for my presentation last week to the Alaska Republican Assembly (“A Way Forward on the #AKbudget“) was understanding the effect on the PFD of the Governor’s and GCI’s proposed fiscal plans.

It’s not necessarily an easy thing to do.  Both the Governor’s and GCI’s fiscal plans propose to change Alaska’s fiscal structure significantly, with the effect that it is challenging to trace the sources and uses of funds in place under the state’s current fiscal approach to how and where they are used under the proposed plans.  But it is possible, with some patience. END_OF_DOCUMENT_TOKEN_TO_BE_REPLACED

A Way Forward on the #AKbudget

As I have before, Tuesday evening I presented to a meeting of the Alaska Republican Assembly on Alaska’s current fiscal situation.   The slide deck is above.

The presentation covered my views on what the current outlook is for Alaska’s fiscal situation if we continue down the road of “business as usual,” an analysis of the alternatives that have been proposed for changing course and my thoughts on the best way forward.

Posted in Posts by Alaskans for Sustainable Budgets, Speeches & Testimony