The Alaska budget, the state legislature, percentages and other significant numbers …

Posted on March 17, 2015 | Comments Off on The Alaska budget, the state legislature, percentages and other significant numbers … 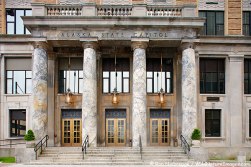 Percentages and other numbers are interesting things.  By selecting different sets you can make things look small or large.

For example, Rep. Lora Reinbold defended her vote last Thursday against the Operating Budget in part using a percentage, claiming that the proposed budget only cut 5% from spending.  Looking at the actual numbers compiled by the Legislative Finance Division (LegFinance) tells a different story, however.

Using LegFinance’s analysis of the final House bill as a base, Rep. Reinbold’s percentage is right if you focus only on certain categories of state spending (what collectively are referred to as “Agency Budgets”), and compare only what those familiar with these things refer to as the FY 16 Adjusted Base (essentially the spending level for FY 2015 adjusted for “normal” year to year changes) against the proposed FY 2016 spending level before the House when she made her speech.

But if you look instead at what is now estimated to be actual spending levels for the same, certain categories for FY 2015 (the year doesn’t end until June 30, so the figures being used are still estimates) against the actual spending level before the House when she made her speech, the percentage rises to 8.4%.

And if you compare instead the estimated actual spending level for all items covered by the Operating Budget (both the “Agency Budgets” and “Statewide Items”) for FY 2015, adjusted to include PERS/TRS for both years, against the proposed FY 2016 spending level before the House when she made her speech, the percentage still rises to 6.7%.

But none of those numbers tell the whole story of what actually is going on with state spending.  Total state spending is composed of two general categories — Capital and Operating.  Focusing solely on the Operating Budget, as Rep. Reinbold did last Thursday, only tells part of the story.  Understanding the total story requires a focus on both categories.

Adjusted again to include PERS/TRS for both years, combined Capital and Operating spending for FY 2015 is now estimated to be $6.32 billion.  On the other hand, assuming operating spending is held to or near the level adopted by the House and both bodies accept the Governor’s proposed capital budget, approved FY 2016 spending is now estimated to be in the range of $5.45 – $5.5 billion, a roughly $820 – $870 million, or 13%, reduction over FY 2015 levels.

That is not an insignificant reduction.  According to the most recent figures, real Alaska GDP currently is in the range of $51 billion.  As a result, at $850 million the decline in spending roughly equals 1.5% of Alaska GDP.  A reduction of that magnitude is manageable, but it is not appropriate to dismiss it as insignificant.

Other numbers also are important to telling the complete story of what is going on with Alaska state spending.

In an extended discussion in an online forum, one commentator yesterday asserted essentially that the proposal to achieve a sustainable budget is doomed because oil revenues will not support the resulting level.  In her words,

But the sustainable budget approach has never been based solely on oil revenues.  Because it calculates a revenue stream that is intended to last indefinitely, beyond the time when oil revenues play a significant role in Alaska state spending, the sustainable budget approach always has included in the calculation some revenue produced from a return on Alaska’s financial assets.

Importantly, some of that revenue is appropriately dedicated to continued growth of the Permanent Fund, but excluding that and taking only the conservative 4% return on the state’s financial assets used in the calculation of the sustainable budget number still produces a total anticipated revenue stream for next year of $4.84 billion.  Excluding the return on the state’s financial assets from the calculation of available revenue is like a two-income family basing its budget only on one of the incomes.  It significantly understates the revenue which the family has available to support itself, and may lead to the family taking drastic measures, like foregoing payments on its health and life insurance, when its total income stream does not require such steps.

This is not to say that the budget doesn’t need to be cut more.  Under current conditions, $5.5 billion in spending still is too high to be sustainable and needs to be reduced in the additional two steps I have discussed in previous commentaries on this page (see here, here and here) to $4.5 billion.

And it is not to say that Alaska doesn’t face a potential revenue challenge.  The current sustainable budget level is calculated in part based on the Department of Revenue’s projection that oil prices will rise significantly by the end of this decade.  If, as seems likely now, that outlook undergoes significant modification when next year’s oil price forecast is made, the anticipated future revenue streams from oil will change and at least that component of the sustainable budget number will go down.

But it is to say that the actions thus far of the current legislature are not as bleak as painted by alleging that the proposed level of spending cuts this session is only 5%, and that we are basing sustainable state spending level of $4.5 billion only on revenues from oil.

The situation is better than that and, thus far, I believe that the legislature has been responsible in responding to it.  But we still have a few more weeks to go ….