Bill Walker: “I will … put in place a sustainable budget.” 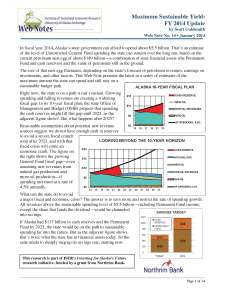 Two years ago the University of Alaska – Anchorage Institute of Social and Economic Research (ISER), the state’s best economic think tank, said this:

“Right now, the state is on a path it can’t sustain. … Reasonable assumptions … suggest we do not have enough cash in reserves to avoid a severe fiscal crunch soon after 2023, and with that fiscal crisis will come an economic crash.” ISER also offered a solution.  “What can the state do to avoid a major fiscal and economic crisis? The answer is to save more and restrict the rate of spending growth. All revenues above the sustainable spending level of $5.5 … would be channeled into savings.”

Frankly, that was not a big stretch.  While the state had spent significantly more in the intervening two years as part of the Bipartisan Coalition-led “stimulus” packages signed off on by the Governor, all that the Governor and the legislature elected in 2012 — which was elected as a backlash to the Bipartisan Coalition and resulted in Republican-led supermajorities in both legislative bodies — had to do was go back to the spending levels the state had adopted in 2010, when the then self-styled “fiscally conservative” Parnell was first running for election as Governor and total unrestricted general fund spending was $5.47 billion.

Indeed, the day after the election, the new Republican-led Senate Majority promised exactly that, listing “develop sustainable capital and operating budgets for current and future generations” as one of its top three “Areas of Focus.”  Many in the House said the same.

But neither in that year — the first year following the 2012 election — nor in this subsequent, past year have the Governor and legislature even approached achieving that objective.

The consequences of these actions are severe.  At the same time as spending has remained at record levels, revenues have slipped away.  From a level of $6.92 billion the year before ISER issued its warning, revenues have dropped subsequently to $5.3 billion, and now an estimated $4.5 billion in the current fiscal year.

And even that does not tell the whole story.  The $4.5 billion in revenues estimated for the current year are built on an assumed oil price of $105/barrel.  Three months into the fiscal year oil has achieved that price level only for the first 30 days and with the oil fields now heading into winter, their strongest production months, the current price is at roughly $95/bbl, with the futures markets and a number of analysts predicting even lower price levels to come.

A rough rule of thumb is that, at current production and tax levels, the state loses approximately $90 million in revenue for each $1 drop in oil prices. As a result, if the average price for the year settles at $95 instead of $105, revenues will drop roughly to $3.6 billion and because of the continued record spending levels enacted by the legislature and signed by the Governor, the deficit will balloon to $2.5 billion.  At that level, the state will be on track to spend through the remainder of its unrestricted savings — already significantly depleted by the previous years’ deficits and other actions last year — in only four more years.  The “fiscal crisis” and “economic crash” ISER first predicted just two short years ago for 2023, will come instead in 2018.

What comes after that?  As a report authored in 2011 by ISER and private economics firm Northern Economics concludes, “institution of a broad based [income or sales] tax, and  use of a portion of the earnings of the Permanent Fund,” just to maintain minimum levels of government services.

What can the state do to avoid that situation?  ISER’s recommendation from two years ago still stands — “save more and restrict the rate of spending growth … [to] the sustainable spending level.”  Adopting that path will resteady the state’s course and put it on a path where both this and future generations are able to enjoy a relatively stable level of revenue, among other things, free of the volatility created by budgets relying on the whim of world oil markets.

Unfortunately, due to the two intervening years of gaping budget deficits, the $5.5 billion target identified previously by ISER is no longer available, nor likely is the $5 billion target they established last year.  Instead, taking into account the intervening spendthrift, “stimulus”-oriented actions of the Governor and legislature, the new target likely is closer to $4.75 billion, or at current oil price levels even lower.  But that still is better — much, much better — than the alternative of continuing down the current path and spending the state off the fiscal cliff that most — other than the Governor and current legislature which have a vested interest in defending their past actions — now recognize lies in front of the state.

Which brings us to a recent evolution in the position taken by one of the candidates for Governor. In a recent update to the “Positions” tab on his campaign website Bill Walker has adopted this position under the heading “Fiscal Responsibility”:

Due to unfettered increases in spending, the present Administration has overseen the greatest revenue deficit in our State’s history. At current rates, Alaska’s savings will be gone in the next 5 or 6 years. I will make the hard choices necessary for a sounder fiscal future, including putting in place a sustainable budget. I will work to make sure the investment climate in Alaska supports those goals, which includes creating a favorable fiscal climate for citizens and companies investing in our economy.

In the meantime, Governor Parnell’s website doesn’t even touch on what I and many others consider the most important issue confronting Alaska today, instead merely resting on the laurels they feel they deserve from the now-largely discredited, Obama-like state “stimulus” spending spree of the last few years:   “While the country was digging out of the Great Recession, Alaska remained a beacon of strength ….”

Disappointingly, the Governor appears content to continue to bury his head in the sand as all economic indicators around him point to significantly fearsome weather ahead. Rather than helping to educate and lead Alaskans away from the economic shoals that lay ahead, the Governor continues “whistling past the graveyard” (urban slang definition: “to enter a situation with little or no understanding of the possible consequences“), resorting to an attitude similar to that taken by Bobby McFerrin in his 1988 song, “Don’t Worry, Be Happy.”

Don’t misunderstand, as I have said on other occasions if the election were held today I would vote for either Alaska Libertarian Party candidate Care Clift or Alaska Constitution Party candidate J.R. Myers.  Both also support putting in place sustainable budgets and, unlike Walker, supported SB 21 and continue to recognize the need to keep that in place and take other steps to reenergize the revenue side of the state’s income statement.

But at least to me Walker has taken a significant step forward by doing something Parnell has a record of avoiding — committing to sustainable budgets.  That does much to resolve my concerns with Walker on the spending side of the state’s income statement.   I will write more about my views on the revenue side in a coming piece.