The most important question of this election ….

ANS oil prices, which as most will recall drive 90% of the Alaska state government revenue, fell again Wednesday to $82.16 per barrel.

The current state budget, which already was $1.6 billion in the red when it passed, is predicated on oil prices averaging $105 per barrel.  (The breakeven price for the budget is roughly $117 per barrel.)

Each dollar change in the price of oil is equal to roughly $90 million in state oil revenues.  That means if oil prices for the year settle at $95/barrel, the budget deficit will grow to $2.5 billion, at $90/barrel to something approaching $3 billion, and at $85/barrel to something on the order of $3.4 billion. END_OF_DOCUMENT_TOKEN_TO_BE_REPLACED

Alaskans can handle the truth, even if some are in denial … 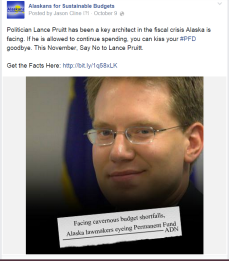 Earlier this week, as part of the “It’s Our Future” campaign, we started running web ads that asserted simply, and correctly, that if those legislators who have voted for state budgets since 2012 are “allowed to continue spending Alaska’s money at the rate we are on, you can kiss the #PFD goodbye.”

We made equally clear that, in casting votes to continue spending far in excess of sustainable levels, those same legislators necessarily are “eyeing” the Permanent Fund earnings because, as the state’s best economic analysts have made clear there will be nowhere else for the state to turn to for revenues at a point in the not too distant future .

The reaction by some has been humorous, in a Greek tragedy sort of way.  Rather than deal with the statement on the merits, a few have resorted instead with variations of “you lie.”  I suppose when you don’t have the facts on your side that’s about the best you can do. END_OF_DOCUMENT_TOKEN_TO_BE_REPLACED