While it has happened occasionally since prices recovered from their 2008 crash lows, Monday was the first time in awhile that ANS oil prices have fallen below $100/barrel. The occasion seemed an appropriate time to check in on where price forecasts are headed generally in the current market environment.

One place that I go often when I want a reality check on oil prices is the futures market. While it — like any other long range price forecast — has its flaws, the one advantage the futures market has over other sources is that it reflects price levels at which at least some buyers and sellers actually have committed to sell and buy oil at given points in the future. While it may not reflect all hedge transactions, at least in my experience it comes close enough to provide a valuable insight into what those with money in the game think about the future direction of prices.

And the current view is sobering, to say the least. Below is a plot of the settle price for transactions on the indicated dates as of the close of the market yesterday. To be clear, there is no publicly posted futures price for ANS, so the following reflects prices for the two oils — Brent and WTI (West Texas Intermediate) — which are traded publicly in such a manner. Generally speaking, for a long time ANS has traded somewhere between the two, but a number of commentators increasingly are predicting that ANS will start settling closer and closer over time to WTI as Canadian and and other Northern Tier (North Dakota, Montana) supplies, which largely follow WTI price levels, increasingly find access to West Coast US markets. The futures prices for Brent are reported here; those for WTI are here.

As background for the discussion that follows I also have added to the graph the ANS oil price forecast made last fall by the Division of Revenue for the same period (at Table B-1b). The DOR forecast reports an annual average price. For purposes of the following chart I have used it as the December (mid-point) price for the relevant year.

Implications for the State Budget

Recall that even at the DOR forecast price levels the Administration late last year predicted continued state budget deficits throughout the forecast period. For example, even with Unrestricted General Fund (UGF) spending continuously capped at $5.6 billion through FY 2024, at the DOR-predicted price levels the Administration forecast continued deficits ranging from $1 billion for FY 2016 to $1.6 billion for FY 2024 (at Scenario 1).

The future becomes even more bleak, however, if you start substituting over the same period the significantly lower prices  reflected currently in the futures markets. In another forecast case presented late last year the Administration held oil prices across the period constant at $100/barrel (Scenario 3). While viewed as a “worst case” scenario at the time, looking at the futures markets that scenario has become much more realistic since, and if the ANS price actually links to WTI over the period, perhaps increasingly should be viewed as a “best case” scenario.

As noted below, under that case the annual deficit rises to $3.3 billion by FY 2024, with both the SBR and CBR completely exhausted by FY 2022. 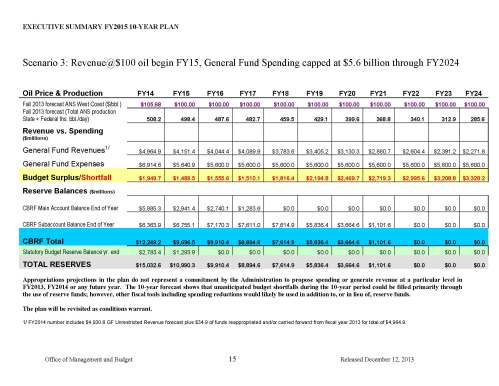 And of course that forecast is predicated on holding to a consistent spending level of $5.6 billion per year throughout the period. In fact, last session the Legislature passed and the Governor signed a FY 2015 budget which authorizes spending of $6.2 billion.

The Impact of SB 21 and LNG

Some will suggest, of course, that both SB 21 and the prospect of an LNG project justify continued optimism even in the face of significantly lower price levels. But neither does.

While an improvement over ACES, even the Administration’s own forecasts of anticipated revenue levels under SB 21 fall woefully short of justifying a continuation of the current — or even the Governor’s proposed $5.6 billion — spending levels at the lower price levels the state may be facing over the next decade. At a $100/barrel forecast (p. 14), over time SB 21 is anticipated only to produce average annual revenue levels in the range of $3.7 billion, even if SB 21 cuts the the decline curve historically experienced under ACES by half. At that price level, even the Administration’s most aggressive forecast — under which SB 21 results in holding production constant (no decline) across the next 30 years — predicts average annual revenue levels of only $5.1 billion.

And at this point at least, making current spending decisions based on the prospect of completing a successful LNG project is the equivalent of putting the state’s future down on a craps table in Vegas.

As with the oil, there increasingly is a lot of uncertainty currently in the global LNG market. For example, both Reuters yesterday and the Sydney Morning Herald today carry stories about significant market problems being encountered by Australia’s Gorgon LNG Project, the poster child for new LNG projects (“Struggling to lock in buyers, Chevron’s Gorgon casts doubt on global LNG sales model”). Whether those changes in market dynamics completely undermine the market for Alaska LNG — as the emergence of L48 shale gas over the last five years did to Alaska’s prospects for an overland pipeline — remains to be seen. But even if they do not, it is becoming increasingly apparent that the availability of significant quantities of L48 gas on the world market will have an impact that will drive current LNG market prices — and any anticipated Alaska revenue levels — down.

Where is Alaska headed

These charts do much to explain why I continually express concern about Alaska’s current spending direction and why I recently have launched an Independent Expenditure campaign in an effort to help bring state spending levels down.

The market clearly is sending signals that there are some rough times ahead. Thusfar, Alaska is not paying attention. Despite the oil gods answering the prayer above by elevating price over the last several years, by ignoring market economics and failing to curb spending to reflect revenues — in other words, living within its means — Alaska is in the process of undermining its long-term future.

I firmly believe that Alaska has the opportunity to have a bright future — to paraphrase President Reagan, there is an opportunity for a “Morning in Alaska.” But to achieve it the state’s leaders — the Governor and the “board of directors” of Alaska, Inc, the Legislature — have to deal in reality. Oil and gas market economics are tricky things. They don’t stay static; they shift. And several indicators indicate that they appear to be shifting yet again. Alaska — and its leaders — need to respond accordingly, but they aren’t yet.