Alaska Fiscal Policy| If you thought that was “truly irresponsible,” how about this … 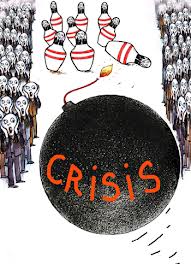 Earlier this week the Alaska Senate Majority was reporting from the Federal Overreach Summit, summarizing some of the key points made during the presentations. At one point during Senator Begich’s presentation they had this to say:

Begich: Federal debt = $46,000 per man, woman and child in US- That is truly irresponsible

It is not clear from the context whether the editorial observation of  “that is truly irresponsible” was the Senator’s or the Alaska Senate Majority’s, but for this purpose it really doesn’t matter. Likely, both agreed on the statement.

The interesting fact that was not added to either Senator Begich’s comment or the summary, however, is the size of Alaska state debt “per [Alaskan] man, woman and child.” According to a study last year, that number is $31,141,  fully two-thirds of the federal level. That was enough to earn Alaska a highly dubious number one ranking — “The largest per capita debt figure for all fifty states.”

No one added “that is even more irresponsible,” but they should.

Usually when this subject comes up some will say, “oh, that’s just the PERS (Public Employee Retirement System)/TRS (Teacher Retirement System) number,” as if knowing what is driving Alaska’s outstanding debt is somehow comforting or justifies ignoring it. Unfortunately, it doesn’t.

The debt is being paid out of the General Fund, the same fund used to pay for education, roads, Alaska’s portion of Medicare/Medicaid and other health care and social service costs, and yes, being tapped among other things also for subsidized airplane tickets for the Great Alaska Shootout, Senator Lesil McGuire’s paving of Anchorage’s Dome parking lot and Mayor Dan Sullivan’s new tennis courts. The more of the Fund that has been used for those things, the less that has remained to pay down the outstanding PERS/TRS debt.

But ultimately, PERS/TRS is not optional spending.  Article 12, Section 10 of the Alaska Constitution provides as follows:  “Membership in employee retirement systems of the State or its political subdivisions shall constitute a contractual relationship. Accrued benefits of these systems shall not be diminished or impaired.”  Many read that, likely correctly, that the state retirement systems constitutionally have a first call on all state assets, including the Permanent Fund.  So, there is no dodging them.

And judgment day on that debt (in both the biblical and legal sense) is coming on, fast.

In an effort to pay down the accrued debt, PERS/TRS is consuming more and more of the available General Fund. In FY 2014, for example, PERS/TRS will account for $633 million in General Fund spending, up from $357.6 for FY 2011, the last time the Legislature enacted a budget within sustainable levels. 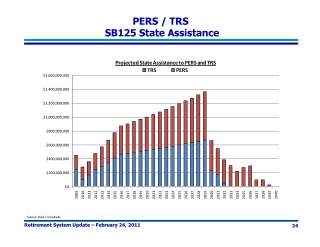 That is just the tip of the iceberg, however.  According to a 2011 presentation to the Senate Finance Committee by the Departments of Administration and Revenue (chart on the left), PERS/TRS will start requiring in excess of $1 billion/year from the General Fund by 2020, staying at that level throughout the remainder of the decade.

Indeed, the coming problem may be even worse than that.  According to a presentation to the Alaska Retirement Management Board earlier this month, “the PERS/TRS unfunded liability grew $889 Million last year as a result of insufficient assets upon which to earn interest.”   At a result, PERS/TRS may start requiring in excess of $1 billion/year from the General Fund as early as FY 2016, two years from now.

The problem with that is that there is going to be less and less money to pay it.

As readers of these pages will know, earlier this year the University of Alaska – Anchorage’s Institute for Social and Economic Research (ISER) published a study analyzing Alaska’s fiscal situation in the coming two decades.  The conclusion, “[r]easonable assumptions about potential new revenue sources suggest we do not have enough cash in reserves to avoid a severe fiscal crunch soon after 2023, and with that fiscal crisis will come an economic crash.”

Comparing the chart accompanying that study (left) with the one above for PERS/TRS demonstrates the truly desperate fiscal situation that Alaska faces beginning in the increasingly near future.  Just as the PERS/TRS obligation ramps up to in excess of $1 billion/year, at current spending levels the amount available to pay those and the state’s other General Fund obligations will fall below $5 billion per year.

Put another way, during the coming two decades PERS/TRS will begin to consume annually more than 20% of the available state General Fund, leaving very, very little of a declining revenue stream to fund education, roads, Medicare/Medicaid — and oh yeah, maintenance on, among other things, that parking lot and those tennis courts.

Why do I describe this situation as “even more irresponsible” than the level of national debt?  Because the future didn’t have to be this way.

The growing “fiscal crisis” (ISER’s words, not mine) has been allowed to fester while the Governor and Legislature, in the last three years particularly, have continued to spend the funds that could have helped address, or at least reduce the severity of the coming crisis, on things like the Shootout, parking lots and, now, tennis courts.

Want proof?  Focus for a moment on the presentation to the Retirement Management Board from earlier this month:  “the PERS/TRS unfunded liability grew $889 Million last year as a result of insufficient assets upon which to earn interest.”

Where could those assets have come from to avoid adding nearly another $1 billion — in one year alone — to state debt?  Answer:  the General Fund.  Where did those assets go instead?  Answer:  Among other places, Mayor Dan Sullivan’s tennis courts.

Alaska is a land of significant opportunity.  I believe that in my soul or I wouldn’t be here.

But it also has become a land of truly bumbling and, to use the Alaska Senate Majority’s own words (albeit in a slightly different context), “irresponsible” fiscal management.

Alaska has a fiscal crisis, a serious one and it will be on us shortly.  There are still ways out of it — ISER’s proposed “sustainable budget” concept is one and there are other steps which could be taken that help — but we are truly about out of time.

And, while we appear to have an increasing number of candidates proposing to lead us through this difficult period, none of them have demonstrated any ability to deal with, or even understand it.  The current Governor has walked us directly into the crisis, aided and abetted by a Bi-Partisan Senate Majority led by the most recently announced Democratic candidate.  The supposed “Independent” candidate’s main talking point deals with a way to spend even more state money, not save any of it.

And the two announced Republican Lt. Governor candidates?  Their legislative efforts have deepened the problem, not helped solve it.

Its a time in Alaska’s history for fiscally responsible leaders to step up.  Where the heck (or as Wally would have said, “Where the hell”) are they?

3 responses to “Alaska Fiscal Policy| If you thought that was “truly irresponsible,” how about this …”