Alaska Fiscal Policy: Is This Generation of Alaskans Failing the Next? (from the August 2013 Alaska Business Monthly)

Posted on August 1, 2013 | Comments Off on Alaska Fiscal Policy: Is This Generation of Alaskans Failing the Next? (from the August 2013 Alaska Business Monthly) 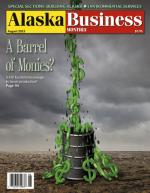 In addition to pieces on this page and elsewhere, I write what began as a bi-monthly, and now has evolved into a monthly, column on oil, gas and fiscal policy issues for the Alaska Business Monthly.  This is the eighth column, originally published in the August 2013 print edition and available online here.

In 1976 Alaskans passed a constitutional amendment establishing the Permanent Fund. The amendment provides in pertinent part that “at least twenty-five percent of all mineral lease rentals, royalties, royalty sale proceeds, federal mineral revenue sharing payments and bonuses received by the State shall be placed in a permanent fund.”

Those here during that period attribute the passage of the amendment to two things.

First, in 1969 the state had received $900 million in bonuses in the oil and gas lease sale that followed the discovery of the Prudhoe Bay field. Within a few years the state had spent the entire amount on various projects. Many thought the spending inefficient and wasteful and voted for the constitutional amendment as a way of putting some of the funds beyond political control.

Second, many realized that oil is a depleting resource and at some point production would no longer provide a significant source of income for the state. They supported the amendment to set aside a portion of the state’s oil wealth for future generations of Alaskans that otherwise would not benefit from it.

The amendment was tied to “mineral lease rentals, royalties, royalty sale proceeds” and similar receipts because that was the only source of North Slope oil revenues being received by the state at the time. Production did not start until 1977. As a result, there were no production taxes being collected at the time the amendment was proposed and the vote taken.

Indeed, while production taxes started growing as a source of revenue after the commencement of production, for the next thirty years they never surpassed the level of revenue produced from royalties. Instead, they were set at levels roughly correlated to the cost of funding state government, in much the same way as income or sales taxes are in other states.

A Change in Philosophy

Both the philosophy behind production taxes and their level changed in the mid-2000s. Beginning with the passage of PPT (the Petroleum Production Tax) in 2006, and subsequently ACES (Alaska’s Clear and Equitable Share) in 2007, Alaska converted its tax approach from one focused on generating revenues sufficient to fund the reasonable costs of state government, to one focused on extracting Alaska’s “fair share” of the revenues produced from oil production.

This approach continues in SB21, the recently enacted replacement to ACES. While the tax rate is lower than under ACES, the rate nevertheless remains based on the Legislature’s view of Alaska’s “fair share” in light of current commercial conditions.

I have suggested in the past that the unilateral nature of this change may have been a breach of contract by the state. Under most legal regimes, the royalty rate negotiated at the time an oil and gas lease is signed is viewed as establishing the mineral owner’s “fair share” of the revenues produced from its lands. Private mineral owners certainly are not permitted unilaterally to reset their “fair share” as oil prices rise. The leases are viewed as a contract and each party remains bound by its terms regardless of whether, in retrospect, one or the other should have argued for better terms.

For good or bad, however, in the mid-2000s Alaska took advantage of its position not only as a mineral owner, but also a government, to end run the normal contractual limitations and, through its taxing authority, unilaterally reset the terms of the state’s “fair share.” Other than the means used to calculate the amount, essentially the state did away with the distinction between royalty and production taxes.

An Increase in State Revenues … and Spending …

The change in philosophy significantly has boosted the level of oil revenues received by the state.

Fully reminiscent of what happened after the 1969 Prudhoe lease sale, state spending has exploded with the increase in revenues. During Fiscal Years 2004 through 2006, before the passage of ACES, spending from the General Fund averaged $2.5 billion.

In the first four years following the passage of ACES, spending nearly doubled, averaging a little under $4.75 billion. In the last three years, state spending has exploded again. In Fiscal Year 2012, the Legislature appropriated and the governor approved $6.72 billion in General Fund spending, a new record.

That record lasted only a year, though. In the recently completed Fiscal Year 2013, state spending reached nearly $7.9 billion, a new record.

Late during this year’s legislative session, the governor announced that he intended to “limit” state spending for Fiscal Year 2014, the current fiscal year, to $6.8 billion, down from the previous year’s record, but still the second largest budget in state history.

Confirming that some view these inflated spending levels as the new “normal,” in the same announcement the governor said that he intends to maintain spending at the $6.8 billion rate for the next five years.

… but Not in the Permanent Fund

Despite the increase in revenues resulting from the 2007 passage of ACES, the then-Governor and Legislature did not similarly revise the calculation used to set aside a portion of the state’s “fair share” of oil revenues for future generations.

After the passage of ACES, as before, the portion of Alaska’s “fair share” contributed to the Permanent Fund remains tied to “mineral lease rentals, royalties” and the like, notwithstanding that the majority of the state’s oil revenue now comes in the form of production taxes.

It is that failure to revise the calculation of the Permanent Fund at the same time as changing the state’s approach to production taxes that raises the question of whether the state is treating future generations of Alaskans fairly.

The Purpose of the Permanent Fund

The philosophy embedded in the Permanent Fund is that all Alaskans are entitled to a share of the state’s oil wealth, not just those who happen to be here during the time the oil is being produced. Sometimes this is referred to as “intergenerational equity,” ensuring that future generations are treated as well as the current one when dealing with a common resource.

The same general philosophy also surfaces elsewhere in the Alaska Constitution. For example, Article VIII, Section 4 of the Alaska Constitution provides in relevant part that “fish, forests … and all other replenishable resources belonging to the State shall be utilized, developed, and maintained on the sustained yield principle.” Simply stated, the “sustained yield principle” is that “takes” of resources by current generations should be restricted so that future generations also are able to enjoy access to equivalent resources.

In passing the 1976 amendment establishing the Permanent Fund, voters made the judgment that “at least” 25 percent of the value received from current oil production should be deposited in the Fund for the benefit of future Alaskans.

With the growing use of production taxes as an alternate means of deriving that value, however, that promise increasingly is going unfulfilled.

From 2001 to 2006, the percent of combined receipts from the state’s royalty share and production tax contributed to the Permanent Fund averaged roughly 18 percent. The difference between that and the 25 percent target reflects the fact that the level of production taxes largely was set to help pay for the reasonable costs of government and, thus, were not attributable to the goal of the Permanent Fund.

Since the passage of ACES, however, the percent of combined receipts from the state’s royalty share and production tax contributed to the Permanent Fund has declined substantially, reaching a low of 8.3 percent in 2008 and averaging only 11.5 percent for the entire period.

What those declining numbers reflect is that state government is increasingly taking more of the state’s current oil revenue stream for today’s citizens and leaving less for future Alaska generations.

To put it in terms that those who fish the state’s waters will find familiar, state government is currently overtaking the state’s fiscal stock to make the life of current Alaskans more comfortable and leaving future generations of Alaskans to suffer with lower and lower returns.

The Impact on Future Generations

Future Alaska generations will see the impact of these decisions in two ways.

First, the Permanent Fund will be smaller, and thus less capable of producing an equivalent revenue stream once current oil revenues decline. The University of Alaska Anchorage Institute of Social and Economic Research estimates that, at its current size, the Permanent Fund is capable of producing roughly $2.5 billion in ongoing revenue. That amount would be substantially higher if the current generation reserved for future generations the same share of production tax revenues as it does of royalty revenues.

Second, state government is creating programs—and expectations—that future generations will not be able to sustain. As noted previously, the governor’s recent announcement appears to lock in long-term spending at roughly $6.8 billion per year, well in excess of the capability of the Permanent Fund.

While the consequences of that overspending may be buffered for some period by drawing down the state’s various reserve funds, Institute of Social and Economic Research estimates that at current spending rates the reserves will be depleted sometime in the early 2020s. At that point, the state will be faced with choosing among sharply cutting programs (leaving future Alaskans with fewer services than the current generation enjoys), enacting substantial sales, property, and income taxes in an effort to sustain the same level of programs, or most likely, a combination of the two.

It does not have to be that way, however, and I will write more about that in future editions.

Bradford G. Keithley is the President and a Principal with Keithley Consulting, LLC, an Alaska-based and focused oil and gas consultancy he founded. Keithley also publishes the blog “Thoughts on Alaska Oil & Gas” at bgkeithley.com.

This entry was posted in The Monthly Lead/Alaska Business Monthly, Thought Pieces. Bookmark the permalink.