An Exchange on the Bond Issue …

The commentary in the next piece down expresses my opposition to Bonding Proposition A appearing on the upcoming general election ballot.  Subsequent to that piece, the Anchorage Daily Planet and Fairbanks News-Miner columnist Dermot Cole also have expressed their opposition here (the Planet) and here (Cole).

The Planet also published a link to my commentary.  Today, coming from that link, I received the following note from former (1992-94) Commerce and Economic Development Commissioner Paul Fuhs.  I regularly receive notes on commentaries from readers  and have received an unusual number of others on the column below. With the exception of the note from Fuhs, however, all of the remainder on this piece have supported the position taken in the commentary and indicated that they also intend to oppose the ballot measure. END_OF_DOCUMENT_TOKEN_TO_BE_REPLACED

Comments Off on An Exchange on the Bond Issue …

Alaska Fiscal Policy| Vote No on Bonding Proposition A … 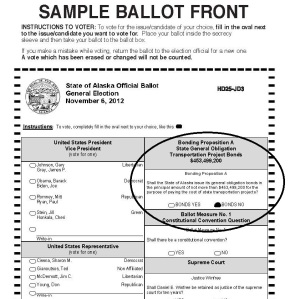 In addition to the 59 legislative races that have been — and will continue to be — widely discussed between now and election day, there also are two statewide measures that will appear on the election day ballot.

One is the question, required by the Alaska Constitution to be included on the ballot every ten years, of whether there shall be a new Constitutional Convention called. END_OF_DOCUMENT_TOKEN_TO_BE_REPLACED

With this piece by Brian Hove, we kick off our Guest Column series.  Periodically, we will publish pieces written by others which provide additional insights into matters affecting Alaska oil & gas policy.  As Brian notes, this article further develops one of the points made in a piece published earlier this month in Oil & Gas Finance Journal by former Department of Revenue oil economist and current consultant Roger Marks.

Brad Keithley’s September 19th blog entry poses the question “What is Alaska’s fiscal plan…” for which he offers a good working definition: “an outline of the government’s long term revenue and expense projections, designed to achieve balance.” END_OF_DOCUMENT_TOKEN_TO_BE_REPLACED

With all due respect to those on both sides of the debate, at this point oil reform is only the second most important issue to Alaska’s future.  Right now, reforming Alaska’s fiscal policy should take priority.

Alaska is at a crossroads.  As I have explained elsewhere on these pages, continuing the current levels of state spending will doom future Alaskans to a lower standard of living, either as a result of reduced state goods and services or the need to implement state income, sales and property taxes to sustain them.  As current spending rates, oil reform may delay that result, but it will not change it. END_OF_DOCUMENT_TOKEN_TO_BE_REPLACED

Comments Off on Don Smith for Senate H …

Posted on October 16, 2012 | Comments Off on Lupe Marroquin for State House: Fundraiser Today

Join me this afternoon (5:30 – 7:30p) for a campaign fundraiser and silent art auction for Lupe Marroquin for State House.  The details are here.  If you are not able to attend, please consider supporting Lupe nevertheless if you have not already, by going to her website and clicking on “Donate.”

This is an important race.  Although the incumbent, Rep. Bob Lynn, suggests he is a fiscal conservative — and apparently fooled Prosperity Alaska into agreeing — he is anything but.   Last session, Marroquin’s opponent voted for the largest spending bill in Alaska’s history and then, on top of that, sponsored a bill (H.B. 236) proposing to return state employees to a defined benefit program.  The latter proposal would undermine Alaska’s ability to achieve a sustainable budget for decades to come. END_OF_DOCUMENT_TOKEN_TO_BE_REPLACED

Comments Off on Lupe Marroquin for State House: Fundraiser Today

(Reprinted from the Fairbanks News-Miner, October 7, 2012)

AN OP-ED BY BRAD KEITHLEY

James Carville is known for many things, but the one that always comes first to mind is the line he used to keep Bill Clinton on message during the 1992 presidential campaign. Carville summed up the campaign this way whenever Clinton threatened to wander off topic: “It’s the economy, stupid.” Clinton got the point and won the election.

A significant number of Alaska legislative candidates are in need of a similar mantra this coming election, except the appropriate theme this time should be “It’s the spending …” END_OF_DOCUMENT_TOKEN_TO_BE_REPLACED

Posted on October 5, 2012 | Comments Off on A Conversation with Tom Anderson: Oil, Gas & Fiscal Policy … and a little Celtic Music 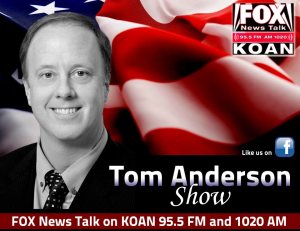 I joined Tom Anderson in studio Monday afternoon for a discussion about Alaska oil, gas & fiscal policy … and ended up also talking a brief bit (at the end) about celtic music.

The tape of the show is here:  Ethically Speaking with Tom Anderson, Monday, Oct. 1, 2012. END_OF_DOCUMENT_TOKEN_TO_BE_REPLACED

Comments Off on A Conversation with Tom Anderson: Oil, Gas & Fiscal Policy … and a little Celtic Music

It’s the right thing to do …

Today’s mailer to House District 23 (sent and paid for by the candidate, with my permission) … 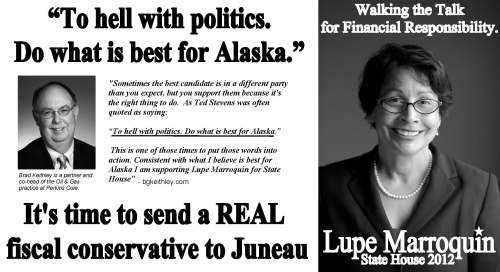 Why is it the right thing to do?   Read the next column, Rewarding Mediocrity …

Comments Off on It’s the right thing to do …

Prosperity Alaska (PA), one of the partners in annually preparing the “Alaska Business Report Card,” released its 2012 General Election candidate ratings this past week.  The ratings provide a “thumbs up” or “thumbs down” on candidates from a “business perspective,” and PA provides endorsements in most legislative races of the candidate it thinks is more in tune with that perspective.