With this piece by Brian Hove, we kick off our Guest Column series.  Periodically, we will publish pieces written by others which provide additional insights into matters affecting Alaska oil & gas policy.  As Brian notes, this article further develops one of the points made in a piece published earlier this month in Oil & Gas Finance Journal by former Department of Revenue oil economist and current consultant Roger Marks.

Brad Keithley’s September 19th blog entry poses the question “What is Alaska’s fiscal plan…” for which he offers a good working definition: “an outline of the government’s long term revenue and expense projections, designed to achieve balance.”

The term “projections” is key, for if we truly intend to create a useful budgeting tool we will have to get better at forecasting three critical inputs: (1) State expenditures; (2) ANS crude oil prices, and; (3) ANS crude oil production.

With the possible exception of Oil Industry execs, who could have predicted State spending would take the aggressive trajectory it has over the last five years? Maybe Representative Mike Hawker’s efforts to implement long-term budgeting within the State’s various cost-centers will prove beneficial. Time will tell.

But this still leaves the two revenue factors to consider both of which are the domain of the Department of Revenue. Forecasting crude oil prices has proven to be a tricky business even for the world’s best analysts. In this regard, it’s difficult to fault DOR’s efforts over the years. Production forecasts, however, may be a different matter.

Roger Marks makes note of this issue in his recent Oil & Gas Finance Journal piece, “Unaware of unknowables: attempts at tax reform in Alaska.” His graph confirms my own observations regarding DOR’s optimistic production forecasts. Comparing actual production against forecasted data drawn from the 1989 (the first year DOR published production forecasts) through 2010 Revenue Sources Books (RSB) — available here — reveals what appears to be a shift in methodology dating back to the 1995 RSB. 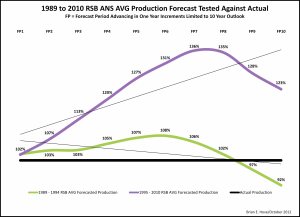 From the 1995 RSB forward, the accuracy of each forecast period took a remarkable turn north of actual results (see graph). The average deviation of each forecast year (up to ten years out) is expressed as a percentage of actual production. The RSBs are split into two groups to demonstrate the substantial difference between the average accuracy of the 1989 – 1994 RSBs (“Group Green”) vs. the 1995 – 2010 RSBs (“Group Purple”).

“Group Green” deviates from the actual by an average of ±8 points across the ten year outlook with the out-years dropping below actual. In contrast, “Group Purple” takes a linear trajectory to reach an average deviation of 136% of actual for the seventh forecasted year. Even the average third and fourth year predictions – 113% and 120%, respectively – far exceed actual production.

This is problematic for three reasons. First, production is a critical factor in accurately calculating projected revenues for which good budgeting depends.

Second, it seems reasonable that DOR might regularly test its methodology against actual results making adjustments as necessary. It’s hard to say this has been the case as perennial optimism appears to have been the rule for many years stretching over several administrations.

While cold reality nips at our ears, many hats are hung on DOR’s gently sloping forecast curves.

Brian Hove is a 32 year resident of Alaska and a graduate of UAF’s School of Management. Much of his professional life has been spent in the banking industry working throughout Alaska as a commercial lender.  From 2003-06 he served as senior staff to State Senator Ralph Seekins.   After a lengthy and active residency in Fairbanks, Hove and his wife now reside in Anchorage.  He can be reached at brianhove@hotmail.com.

This entry was posted in Guest Columns. Bookmark the permalink.