Posted on February 8, 2012 | Comments Off on Talking About Alaska Oil & Gas 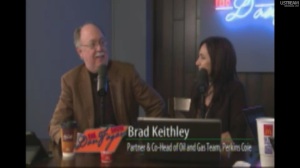 My appearance yesterday on the Dan Fagan Show — the television version — is available here.  The segment runs from 1:54:30 to 2:27:10. Dan followed up for a few minutes after beginning at 2:29:30. The discussion started with the recent TAPS decision by Judge Gleason, and went on from there.  We continued the exchange this morning on Dan’s new radio show on KOAN — and ended up having an extended discussion of the Norway business model.  I don’t find a recorded segment available online of the radio discussion, but it was an interesting exchange that I look forward to continuing.

In the meantime, HCR 19, “Acknowledging the lessons learned from the 2011 Norway Policy Tour and encouraging investment in the state’s oil and gas industry,” introduced by Rep. Bob Herron and co-sponsored by Reps. Edgmon, Seaton, Tuck, Guttenberg, Gardner, passed the House Economic Development, Trade and Tourism Committee this week and has been referred to House Rules for consideration before being advanced to the floor for a vote.

Among other things, the Resolution calls on the Legislature to “explore how co-investment in resource extraction activities would benefit private sector job expansion, affordable energy options, value-added options, revenue generation and competitiveness.”  That’s a start.