(Background on the source and purpose of the Sunday Morning Note is here.)

As usual, we start with this past week’s data.  After opening the week very roughly on the back of data indicating continued problems with Chinese demand, oil prices recovered sharply by the end of the week to close higher not only compared with the lows encountered at the start of the current week, but also even from the first of the month.

Here is the chart reflecting the closing prices this past Friday (an explanation of the source of the data is here); :

By the end of this week, however, not only had those drops been reversed, but both near and longer term prices had climbed higher than the levels experienced at the first of the month.  Looking back to data from the close of the first full week of the month (see the Note for August 9), next month prices for both WTI and Brent are now higher than they were then, as are prices for all the oil futures we follow:  same month 2016, 2017, 2018 (added to the chart this week) and 2020 WTI and Brent.

A look at the weekly close price for October 2018 WTI helps make the point. While prices certainly have not recovered to the $65+ level experienced earlier this year, they also have bounced off the sub-$55 low they had fallen to last week (as well as the sub-$53 low they have fallen to earlier this week). 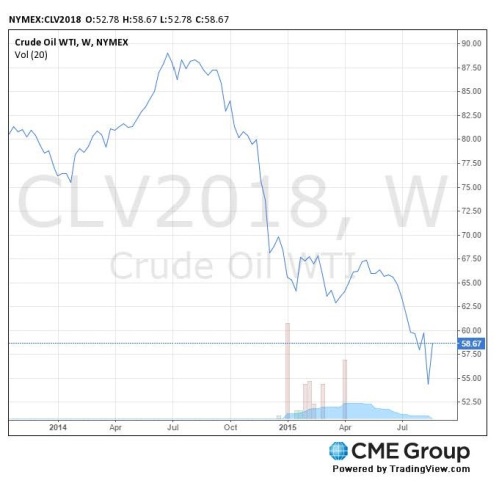 In comments to the Financial Times one analyst that I generally respect attributed the bounce largely to short-term technical factors.

Hedge funds and other large speculators had last week amassed the largest short position in US crude oil since March.  As of Tuesday, they held paper positions betting on lower prices equivalent to more than 191m barrels of oil, but traders said they had moved to buy these back as equity markets stabilised.

… ‘This is a short-covering relief rally after broader markets have stabilised and traders have lowered their expectations for a September rate rise from the US [Federal Reserve],”’said Amrita Sen at consultancy Energy Aspects.

‘Our view is that fundamentally nothing much has changed. The market is still oversupplied. Oil tanker rates have fallen sharply due to lower shipments to Asia.’

Given that the recovery occurred in both short and long-term markets I tend to believe the correction reflects a more fundamental revision in market view.  Short-covering tends to be concentrated most in short-term markets, while as last week’s Note explains longer term markets tend to concentrate more on longer term trends.

Based on that I am inclined more to believe that longer-term traders view the price crash over the last month as an overstatement of where the price of oil is likely to settle over the longer term, and the lower prices an opportunity for buyers to scoop up what, as the contracts mature, will be a lower cost of supply.  It is clear, however, that a lot of uncertainty continues to exist in the market and no clear pattern is emerging.

In other news of the past week, we include here a link to the video of last Monday’s hearing before the House Finance Committee at which the Administration provided an update on its current thinking on state fiscal policy.  We discussed the then-upcoming hearing and our concerns in last week’s Note.

As it turned out the hearing not only provided a useful insight into the current thinking of the Administration but also some members of House Finance.  Most important of those in our view were the two references made during the hearing by HFIN Co-Chair Mark Neuman to the “$4.5 billion plan“ offered earlier this year by former Institute for Social and Economic Research Director and UAA Professor Emeritus Scott Goldsmith.

Those references by Co-Chair Neuman, both favorable, occur roughly at the 108:00 mark (to get a running jump on the reference, start around the 107:30 mark) and around the 136:45 mark.

The references were especially interesting in light of the negative outlook issued the previous week by Standard & Poor‘s which emphasized the need for Alaska to adopt a fiscal plan.  (“We recognize that elimination of the structural deficit is likely to be a multiple-year process. Given its reserve balances, we could maintain the rating through several years of deficit operations if the state were making consistent and material progress toward balance ….”)  One reaction was that Co-Chair Neuman was outlining the beginnings of such a plan.

Any hope that a consensus already was forming around the approach was quickly dashed, however, when following Co-Chair Neuman’s second reference, the other HFIN Co-Chair, Steve Thompson, interjected his own view that the $4.5 billion plan may be “too optimistic.”  Increasingly, those words are being used as code by some for the view that a solution to the state’s fiscal situation ultimately will require the adoption of “broad based” (i.e., state income, sales or property) taxes.

It will be interesting to see if, and how, Rep. Thompson fleshes out his alternate view as the legislature moves closer to session.  In the meantime, the video of the full hearing follows:

Looking forward, we hi-lite a fiscal forum being co-sponsored next month by the  University of Alaska-Anchorage Institute of Social and Economic Research (ISER) and Alaska Common Ground.  Designed to help progress the state’s fiscal conversation from a conceptual stage to something more concrete, among others the September 19 forum will feature the presentation and discussion of four alternative fiscal plans designed to close an assumed annual $2.5 billion gap (between spending and traditional oil and other revenues) for each of five consecutive years. 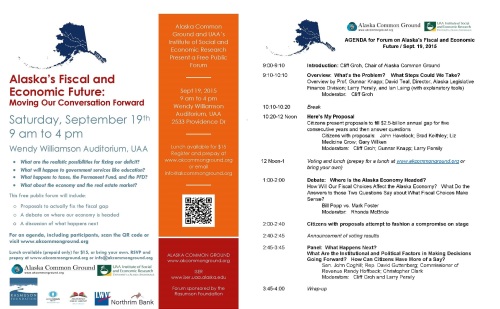 During my turn in the box I intend to advocate and provide the details for how Alaska can transition from its current situation to the $4.5 billion sustainable budget plan outlined earlier this year by Dr. Goldsmith and referenced by HFIN Co-Chair Mark Neuman at this past week’s hearing.

I suggest the forum is something well worth putting on your calendar.

This entry was posted in Sunday Morning Note .... Bookmark the permalink.