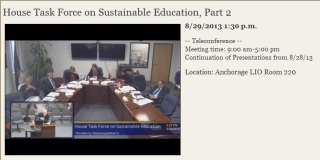 One of the best recent debates about the state’s current fiscal situation and future occurred at the end of yesterday’s meeting of the House Task Force on Sustainable Education.   I was presenting on the issue, when Andrew Halcro, another member of the Task Force, had a question, that began in the first few sentences with “I don’t agree …”

And then, after awhile, Rep. Charisse Millett jumped in.  By the end all of the Task Force members (with one exception who had to depart early) had weighed in.

Respectful, fact filled, reasoned, intense … just the way a debate is supposed to be.

If you like fiscal policy, or just want to hear some discussion about different perspectives on Alaska’s future in the context of addressing education policy, I recommend these 100 minutes to you.