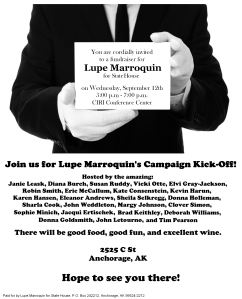 There is a clear and important choice this year in State House District 23.

On one side is the incumbent, who has very little to show for his years in the state legislature and who has voted for — and indeed, taken pride in — two of the largest budgets in Alaska history, both of which according to the University of Alaska’s Institute for Social and Economic Research (“ISER”) have materially increased the financial burdens on future Alaska generations.

On the other side is a fiscally conservative Democrat with 24 years in public finance and budget analysis who, not only in private conversations but proudly on her campaign website, makes clear that she is running to return Alaska to sustainable budgets.

Sometimes the best candidate is in a different party than you expect, but you support them because its the right thing to do.  As Ted Stevens was often quoted as saying, “To hell with politics. Do what is best for Alaska.”  This is one of those times to put those words into action.

Consistent with what I believe is best for Alaska I am supporting Lupe Marroquin for State House.  I hope you will join me both in doing so, and at her fundraiser this coming Wednesday.

In addition to other activities, Alaska Energy 1st analyzes contributions to various state races.  Their most recent analysis of the contributions to the House District 23 race, captured in the graph below, should raise eyebrows. 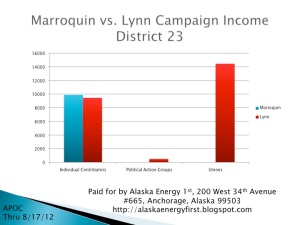 The eyebrow-raising thing?  The candidate receiving the overwhelming Union support is the Republican incumbent, rather than the Democratic challenger.

Why would that be?  As noted above, the Republican incumbent has voted for and warmly embraced the  last two pork-barrel riddled state budgets which, as ISER has put it, have increased the financial burdens on future Alaskans.  Generally speaking, Alaska unions appear to favor spending state dollars now, while their current dues paying members are located in the state, rather than later, when those members are likely to have retired … out of state.

The Democratic challenger on the other hand has been clear in her support for capping spending at sustainable budget levels, an approach which treats current and future Alaska generations the same.  As she says, “I’ve raised my children in this great state and now my grandchildren are growing up here.  I understand the urgent need to control spending to make sure there’s a future worthy of them.”

Those concerned about Alaska’s future in both parties should take note.  It is becoming painfully apparent that the Republican candidate in House District 23 is a wolf in sheep’s clothing.  While claiming to be “fiscally conservative,” he is anything but.

From the perspective of those concerned not only about Alaska’s present but also its future, the far better choice is the challenger, Lupe Marroquin.