Arguably the most Anti-Alaska ad ever, and it’s from the Alaska Republican Party …

Sometimes the most deadly enemy is the one within.  So it seems may be the case with the Alaska Republican Party.  Here is their effort: 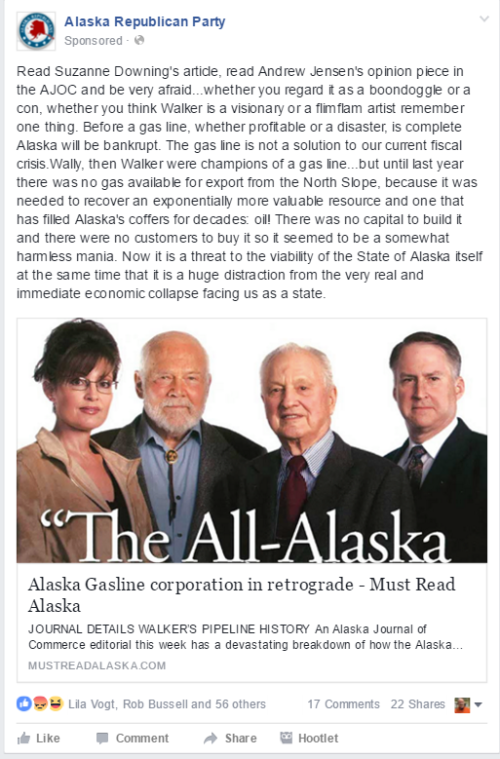 The purpose of the ad seems to be to take a partisan pot shot at Governor Walker’s recent actions with regard to the #AKLNG project. Don’t get us wrong, we are not fans ourselves of some aspects of what the Governor is doing.

But the ad goes further and in the process of shooting at Governor Walker, directs a kill shot also at the Alaska economy.  Here it is:

Before a gas line, whether profitable or a disaster, is complete Alaska will be bankrupt. The gas line is not a solution to our current fiscal crisis. … Now it is a threat to the viability of the State of Alaska itself ….

For good or bad, Alaska is a resource state and the future of Alaska is inextricably tied to the development of those resources.

And as the Prudhoe oil field continues its decline, successfully attracting investment to and completing a project to monetize Alaska’s substantial gas resource is increasingly critical, to both gas and oil development.  But don’t take our word for it; this is from comments filed by the Resource Development Council with the Federal Energy Regulatory Commission just last December, seven short months ago, after Governor Walker had already been in office nearly a year and when global oil and LNG prices were even lower than they are now:

With steadily declining throughput of oil in the trans-Alaska Pipeline System (TAPS) and new exploration and development highly unlikely in the Chukchi Sea in the foreseeable future, the Alaska LNG Project is positioned to become the foundation of Alaska’s economy in the 21st century. The project could create between 9,000 and 15,000 construction jobs and 1,000 permanent jobs. Moreover, it is important to recognize that for every oil and gas industry job, there are an estimated 20 additional jobs generated across Alaska’s economy.

The project is expected to generate billions of dollars in revenues annually to the State of Alaska. Providing a market for Alaska’s natural gas will likely spur further exploration across the North Slope and Interior Alaska, increasing throughput in and extending the life of TAPS, as well as generating more private sector economic activity and jobs for Alaskans.

The Alaska LNG Project will also make affordable natural gas available to Fairbanks and other communities, which in recent years have experienced the highest energy rates in the nation to heat their homes in the harsh Arctic climate.

Now, through the medium of Facebook the Alaska Republican Party — just let that sink in for a moment, the Alaska Republican Party — is telling potential customers and their governments (that will be involved in evaluating the security of the supply and approving those purchases), competitors who are looking for opportunities to promote their projects and undermine Alaska’s, environmentalists and others who oppose the line, FERC (which must approve the project), the Congress (which likely will be involved in various stages of it) and virtually any and everyone else in the world that … “[b]efore a gas line… is complete Alaska will be bankrupt [and that] it is a threat to the viability of the State of Alaska itself ….”

In other words, in the opinion of Alaska’s largest political party, “don’t take this project seriously; it won’t ever be completed and if it is, Alaska won’t be able to back up any commitments it has made in support.”  Or put more simply from a marketer’s perspective, “here is the shotgun, we have loaded it for you, now point it at our head and shoot.”

As we said, we are not fans of some aspects of what the Governor is doing.  But that doesn’t mean we don’t remain supporters of the project.  As we wrote in yesterday’s “First Post,” there is a way forward on this project.  And this isn’t just any old project.  As the RDC correctly points out, “the Alaska LNG Project is positioned to become the foundation of Alaska’s economy in the 21st century.”

2 responses to “Arguably the most Anti-Alaska ad ever, and it’s from the Alaska Republican Party …”