Last Friday the Walker Administration released the proposed FY 2016 budget that former Governor Parnell had been working on prior to the election and transmitted to the new administration as part of the transition process.

While there will be more — likely much more — to say about the proposed budget in the days ahead, it is worth noting a few highlights at this point to help start a needed conversation on the state’s current fiscal situation and the choices going forward.

According to the “Preliminary Decision Summary” included as part of the package, the proposed budget contemplates $5.5 billion in total unrestricted general fund (UGF) spending.  That is composed of roughly $5.3 billion in the operating budget, and $200 million in the capital budget, a reduction of roughly $225 million and $375 million from FY 2015 levels, respectively.  $52 million of the reduction in the operating budget results from reversing some of the increased education funding enacted the legislature and signed by the Governor last year; the remainder is roughly evenly split between formula and non-formula programs.

But that number contains some smoke and mirrors.  According to the budget “highlights” (apparently prepared by the Parnell Administration), some of the annual contribution to the PERS/TRS accounts normally funded through the operating budget instead is proposed to be funded through “pension obligation bonds,” which essentially defers the payment to another day.

Last year, when the legislature passed and the Governor signed the bill transferring $3 billion from the Constitutional Budget Reserve to PERS/TRS, the bill’s sponsors estimated that this year’s  contribution to be made from the operating budget would be in the range of $345 million.  Instead, the proposed budget only provides for roughly $6 million in the relevant account.  Some of the remainder — $257 million — is being funded through additional debt (the pension obligation bonds).  The remaining difference between last year’s estimate and this year’s proposed budget ($82 million) is unexplained.

If instead of being deferred to subsequent years the full amount was contributed as scheduled, the proposed budget this year instead would be $5.85 billion, only $400 million less than that approved for FY 2015, with almost all of the decrease coming from the capital budget and virtually none from the operating budget.

But the real highlight, if you can call it that, of the proposed budget is not one mentioned in either the press release or the “highlights.”  That is the amount of the deficit and resulting drain on savings, if enacted, the budget would produce.

While the Department of Revenue has not yet published the Fall Revenue Sources Book for this year, last year’s contains a forecast of state revenues at various oil prices for the coming year.

The results are contained in the chart below, which appears here at page 88.  The relevant year, of course, is FY 2016. 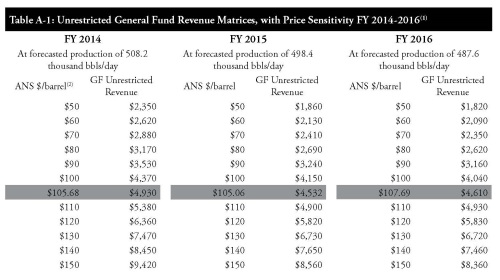 The number highlighted on the chart for FY 2016 — $107.69 — is that forecast last year as likely to be the prevailing price for the coming year.  Of course, the market has changed since and the price likely to be experienced in FY 2016 will be much lower.

But it is important to note that even using that price, the proposed Parnell budget would have been roughly $900 million in the red, and $1.2 billion in the red if the deferral of the annual PERS/TRS payment were made as scheduled.

The price for ANS as of last Thursday’s market closing was $67/bbl.  If that were to remain the price throughout FY 2016, total revenues for the year would equal $2.3 billion and the proposed Parnell budget would produce a staggering deficit of $3.2 billion ($3.5 billion after accounting for PERS/TRS).  Put another way, at that price level actual revenues would fund only 40% of the budget; the remaining 60% would have to be pulled from savings.

While the current balances of the state’s two unrestricted savings accounts — the Constitutional Budget Reserve (CBR) and Statutory Budget Reserve (SBR) — currently appear higher, adjusting for the $3 billion scheduled by last year’s legislation to be transferred during this year from the CBR to PERS/TRS, and the amount that will be required to close this year’s deficit, those two accounts are likely to have a combined balance of only $10 billion by the end of this fiscal year.

At $67 oil, those savings accounts will be depleted in a little under 3 years at the spending levels proposed by the Parnell budget; at $85 oil, the number stretches only to a little over 3 years.

To balance, the Parnell budget would require average oil prices to equal roughly $12o/barrel next year.  No analyst — none — currently estimates oil prices recovering to that level.

During the fall campaign candidate Bill Walker had this to say about fiscal policy:

Due to unfettered increases in spending, the present Administration has overseen the greatest revenue deficit in our State’s history. … I will make the hard choices necessary for a sounder fiscal future, including putting in place a sustainable budget.

The final Parnell budget proposes to continue the revenue deficit,  leaving it to now Governor Bill Walker to live up to his campaign pledge of making the “hard choices” that will be necessary to return Alaska to a secure fiscal future.

It didn’t have to be this way.  If the Parnell Administration and legislature had adopted sustainable budgets following the 2012 elections as at least some promised, state spending already would be lower, state savings would be higher and the adjustments required to reflect the current oil pricing situation smaller.

But they didn’t and the state is where it is — with a proposed budget that contains a $3+ billion deficit.  It will be hard work to make the “hard choices” necessary to address the situation, but the effort needs to start now.  Otherwise, the hole will just be bigger — and the options fewer — the next time around.