One View of the Future, and its Not Good for Alaska

Posted on April 21, 2012 | Comments Off on One View of the Future, and its Not Good for Alaska 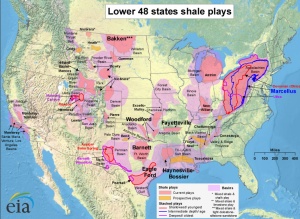 The Alaska World Affairs Council (AWAC) lunch yesterday was interesting — and important.  The speaker was Lou Pugliaresi, President of the Energy Policy Research Foundation (EPRINC).  The presentation was part of AWAC’s recent “Oil & Gas Series.”  The title was “The Coming Renaissance in North American Oil and Gas.”

While AWAC likely will post the slides Mr. Pugliaresi used at yesterday’s presentation, they largely were drawn from the set he used  earlier this month before the Annual Washington Energy Policy Conference hosted by Center for Strategic & International Studies.  That presentation is available here.

The slides — as did Pugliaresi’s speech — outline in detail the rapidly expanding — indeed, transformative — impact of shale oil and gas developments on the U.S. energy picture.  (For a similar analysis from the perspective of the transportation market, see A. Marks, “Can the natural gas boom make oil obsolete?,” Alaska Dispatch (Apr 22, 2012), reprinted from The Christian Science Monitor (Apr. 22, 2012)).

Alaskans, of course, have become familiar with the impact on the Alaska economy of Lower 48 shale gas as it has increasingly overtaken and undermined the potential market that once held promise for Alaska gas.

The potential for a similar shock to the Alaska economy from Lower 48 shale oil, however, has not been widely considered.  To be sure, Alaska is nowhere mentioned in the slides and there was not any one portion of Mr. Pugliaresi’s presentation which focused directly on the potential effect of shale oil on Alaska.  But to those who understand Alaska’s economy and fiscal structure,  the impact is clear and Mr. Pugliaresi’s speech yesterday was a serious wake up call.

The important point of Mr. Pugliaresi’s presentation to Alaska is captured on the last slide, second bullet.  That reads:

U.S. is now poised for major economic renaissance from the both oil sands and unconventional natural gas and liquids. Net present value of $1 to $2 trillion if appropriate policies put into place.

During the presentation Mr. Pugliaresi described the $1 to $2 trillion positive impact to the economy as largely a consequence of the sustained, long term drop in oil prices anticipated to result from the coming rise in overall production from shale and other unconventional oil.  The price levels he mentioned were $90/barrel and below.

Why is that, as the title suggests, “not good for Alaska?”  The reason is simple:  At current production levels and government spending rates, Alaska state government will start to sink below the water line — begin deficit spending and drawing down its “rainy day” funds — if oil prices fall to that level.  If Alaska production levels do not  increase and such price levels continue over an extended period — as Mr. Pugliaresi suggests they will — the net effect will be to change the Alaska economy for the worse.

The potential is captured graphically in the Alaska Office of Management & Budget’s most recent 10-year forecast:

At a $90/barrel oil price, continued oil production declines push the state into deficits beginning next year and keep it in that position thereafter.  The detail behind the graph shows that the Statutory and Constitutional Budget Reserves, the two rainy day funds that are intended to cushion occasional differences between spending and revenues, are exhausted by 2020.

When I discussed this scenario before the Senate Resources Committee early in the recent legislative session, Senator Stedman said that it (draining the Statutory and Constitutional Budget Reserves) would not “happen … we [the Legislature] won’t let that happen.”   His solution, however, was not particularly comforting.  Rather than let the budget reserves be drained, the Senator suggested that the Legislature would start cutting the budgets from the outset, to match the decline in oil revenues.

The impact of those cuts — whether they come earlier as suggested by Senator Stedman or later as is more likely as the Legislature puts off the day of reckoning — will be serious.  Currently, 90% of the costs of Alaska government are funded by oil revenues.  There are no other revenue options that remotely approach the same level.  As oil production — and revenues — fall, so necessarily must state spending.

As a result, under the $90/barrel or lower priced scenario, the state would be forced to adopt rapidly shrinking — or no — capital budgets and rapidly shrinking operating budgets.  That means, in turn, significantly reduced public sector construction jobs, smaller state support to schools and little to no municipal revenue sharing, to name just a few things.

Unlike the impact of shale gas on Alaska, there is a possible way to offset the potential impact of what appears to be the coming shale oil “gale.”  Even with lower prices, overall state revenues could be maintained if they were offset by higher oil production levels.

While some saw it coming, most Alaskans were caught by surprise at the tsunami-like effect on the state’s economy of the Lower 48 shale gas “gale.”  The warning lights now are beginning to flash for the potential second wave from the coming Lower 48 (and worldwide) shale oil gale.  It is time to start taking that potential into account in the state’s thinking.