Our Mission Statement for the 2018 Election Cycle 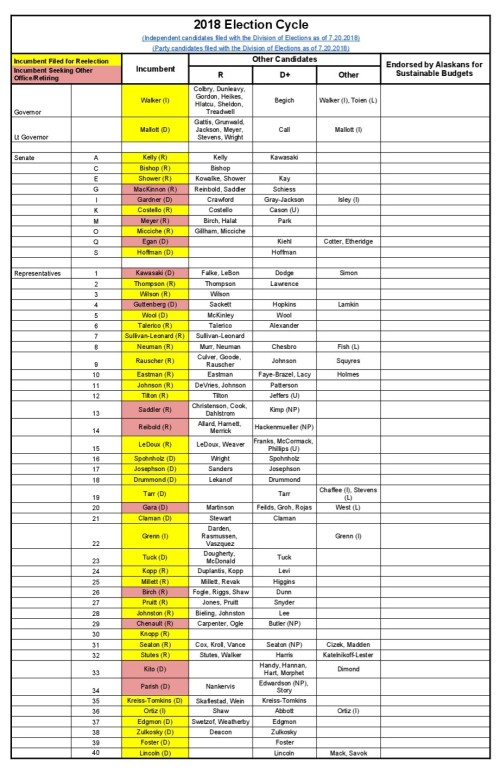 We have been working on a number of pieces of our Independent Expenditure effort as we prepare for the coming election cycle. For those interested, here is the current draft of our mission statement.

Alaska is in a recession.

The ISER analysis of the state’s current fiscal situation has been crystal clear throughout that cutting the PFD adds to that.  According to that analysis, cutting the PFD has the “largest adverse impact on the economy” (both on jobs and income) and is “by far the costliest measure for Alaska families” of all the various “new revenue” options.

Those are the direct quotes:  “largest” and “costliest.”

There are no contrary analyses; none. There hasn’t even been a substantive rebuttal of the point.

Yet, despite the fact that the state is already in a recession, that is the fiscal policy that, to varying degrees, the Governor, Senate and House all have pursued.

There are some beneficiaries of that policy.  Some parts of the economy tied closely to government spending levels have been maintained, and the Top 20% of Alaskans by income have dodged paying a significant share of the resulting costs.

But those have come at the disproportionate expense of the Remaining 80% of Alaskans and, even more importantly, at the cost of imposing a larger adverse impact on the overall economy and Alaska families.

Put simply, the Governor, Senate & House have prioritized the government sector over the overall economy, and the Top 20% of Alaskans over the Remaining 80%.

They have made the overall Alaska economy and the economic position of most Alaskans worse.

In our view that creates a need for significant change this coming election. We intend to play a role in bringing that about.

This entry was posted in Immediate Reactions, Posts by Alaskans for Sustainable Budgets. Bookmark the permalink.

One response to “Our Mission Statement for the 2018 Election Cycle”